Difference between Bedding soil and Topsoil

B-Sharp Property MaintenanceBlogLandscapingKnow your Fungi
May 14, 2019 No Comments By bdashsharp Landscaping

What are fungi? Fungi are any group of spore-producing organisms feeding on organic matter. This includes molds, yeast, mushrooms, and toadstools. In fact, there are as many as 5.1 million different fungal species.

Fungi is as important to our lives as wheat, cattle or any other living thing. Although some fungi can be annoying it is all a part of our ecosystem. Truly, without the various fungi, we would soon be overtaken by dead leaves, dead trees, and dead plants. Also, some animals would be unable to digest their food without the help of fungi. In this blog, I will talk about a few different types of fungi.

The fungi kingdom is broken down into groups, let’s talk about a few of these groups:

Blastocladiomycota: soil dwellers that digest waste or debris of all kinds.

Neocallimastigomycota: in the digestive tracts of plant-eating animals.

In fact, is the largest of the fungi groups that we are familiar with. This group of fungi includes mushrooms, puffballs, stinkhorns, bracket fungi, jelly fungi, boletes, smuts, earthstars and many more. Most of the fungi are hidden from our view under the soil, leaves, and deadwood.

Mushrooms are one of the most noticeable groups of these fungi. You can get rid of this fungi by removing it from the ground as soon as you see the caps appear. You can also apply nitrogen fertilizer to deter them from growing or use soap and water. 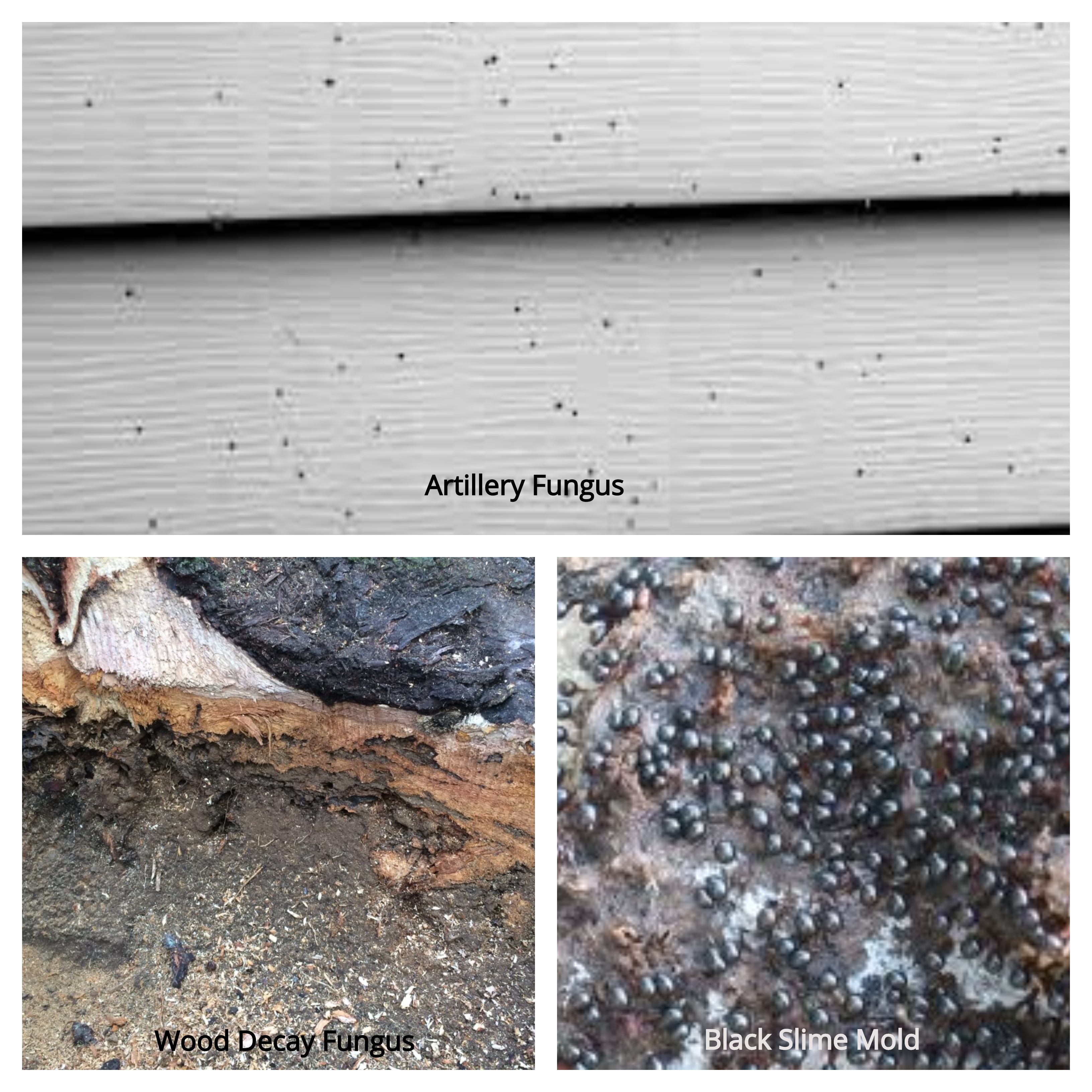 Have you noticed dark spotting on your siding or your vehicles? This is because artillery fungi can shoot spores up to 20 feet and they typically aim toward the sun and like to stick to light-colored surfaces. Your best bet for removal is to clean the area immediately with a non-toxic cleaner.

Artillery fungus grows in every form of organic mulch, you will not be able to completely stop the fungi from forming. You can, however, try to cover your mulch with black plastic to protect your property. This will also heat up the area so that it will kill the spores. Worst case scenario you will need to remove all the mulch from your property and replace it with stone or non-wood mulch. If you are experiencing any of these types of mulch, please do not hesitate to contact us!