Difference between Bedding soil and Topsoil 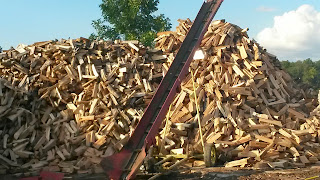 It has been a crazy winter from nearly 60-degree weather in December to snow the next day.  We all know how Ohio weather is; with the up and down of bitter cold like we are having today. It’s nice to have firewood on hand, to keep warm in this unpredictable weather.
Groundhog day was not too long ago and Punxsutawney Phill did not see his shadow. So spring is coming early so they say!  It’s still cold out there, waking up to snow flurries and it feels like single digits today. I bet even though Punxsutawney Phill does not live in North Canton, he has firewood on hand!

You should always use seasoned firewood. Usually new cut wood contains moisture that will cause you issues in the burning process and will produce an excessive amount of smoke. Here in North Canton, I have a fire going every day in the fireplace insert I bought from ComforTec Inc.  Waking up to a nice warm home is a beautiful thing.  I would like everyone to know, that we have plenty of seasoned firewood left for pick up or delivery near North Canton.